Many will be shooting fireworks to celebrate the independence of our country around July fourth and some of us will commemorate the occasion by taking photos of them. Here are some basic steps I think will help you capture the best fireworks pictures. The steps may seem hard but firework shows are usually long enough that you should have time to experiment to get the right shot you are looking for.

1. Scout out the location beforehand to make sure you are getting a good perspective of the fireworks. Some of the best shots I’ve seen include some objects in the foreground such as silhouettes of people, landmarks or the best yet, a river or lake that reflects the light from the fireworks.

2.Set the camera’s ISO sensitivity to the lowest native setting (usually 100-200). Low ISO will serve two purposes as it will allow for a cleaner picture with less noise, and secondly, a lower ISO will allow the shutter to be open longer allowing the light from the fireworks drape across the sky.

3. Set the focus to manual and focus to infinity. Chances are that you’re going to be dissapointed with your camera shooting in auto focus mode. As good as today’s DSLRs are, most won’t be able to timely focus using the available light and cause you frustration all night.

4. Shoot in manual exposure mode. Set the aperture to f8 as starters and the shutter speed to “bulb”. In this setting, as long as the shutter is depressed the shutter will remain open. Start with 2-4 seconds, but you’ll have to experiment with the aperture/shutter speed combination. Another thing to consider, is that if you have an object, such as a landmark in your photo, you’ll want to make sure it’s properly exposed as well. Use your long exposure noise reduction setting on your camera unless you are planning to do that in post production.

5. Get a cable release to minimize movement on long exposures. This is almost essential in order to avoid camera shake. The bulb setting will hold the shutter open as long as the release is pushed. If you are having to hold the release down on the camera, you are introducing a lot of shake in your photo which will make the picture lose sharpness.

6. Shoot in both landscape and portrait modes. You’ll have to experiment with this, but be sure to allow plenty of room to make sure you get the entire shot.

7. Try opening the shutter when you see the rocket is shot vertically, and then follow it until the glow of the firework hits the ground.

8. Take note, fireworks produce a lot of smoke. Try to position yourself upwind from the display to avoid it. You can really ruin you shot if you can’t see clearly the fireworks.

9. Don’t use your flash at all but be aware of unwanted light sources such as street lights that can creep into your photo.

10. Enjoy your shoot and share your photos with others. 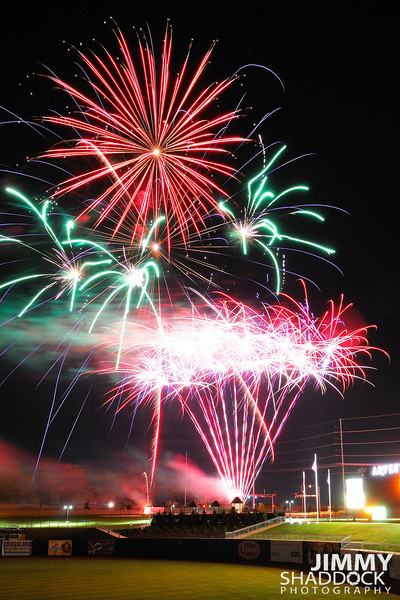